Connecting Londoners in a Networked City

Connecting Londoners is a collaborative project exploring how to use maps and online systems to help connect people and groups in local communities, and in networks.

The Connecting Londoners group developed during 2016-2018 as part of the Networked City exploration initiated by the London Voluntary Service Council. Over the past two years those involved have:

Who we have worked with

In local communities maps and online systems may help residents and others find out more about what's happening in the area, share ideas and information, and collaborate on improvements. For example, we are currently developing a pilot system in Thames Ward, Barking, using maps and online systems to complement existing communications and meetings. It will be designed and run by residents, with support from the Thames Ward Community Project. When fully developed, the system could be used to address issues like:

The system won't aim to replace existing communications, like WhatsApp and Facebook groups. It will gather and organise information about the area, and add more methods for connecting, where needed. We will develop live demonstrations on three fronts:

Drew Mackie and David Wilcox are working with Barbara Brayshay to build on the work of JustMap in creating geographic maps. For example, here's an online map of the StARTNetwork in Tottenham. It shows groups, organisations and facilities, with popup information. View it online here. 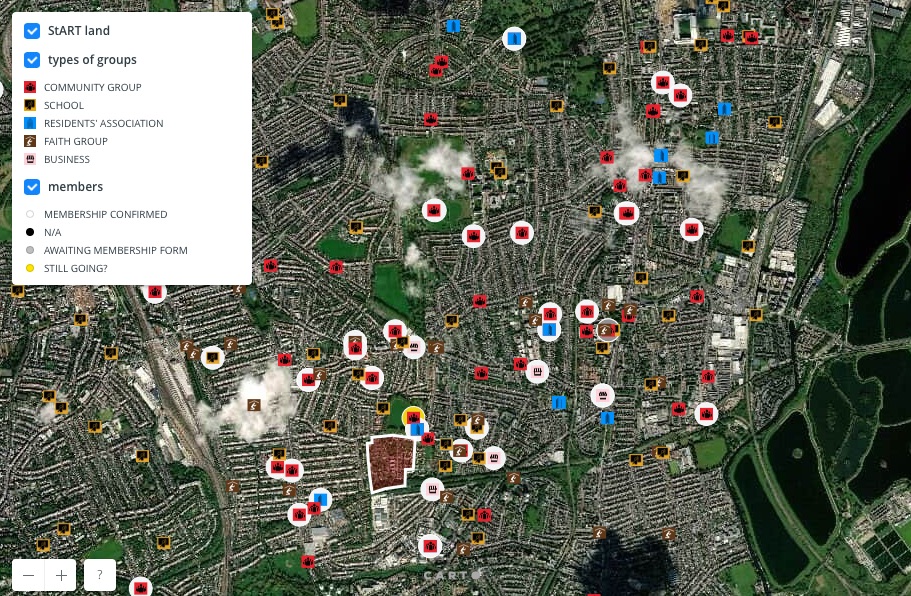 We can also show how groups may cluster around particular interests 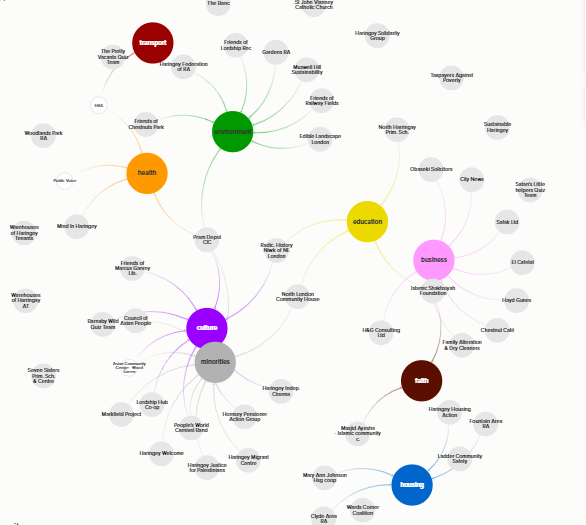 Network maps can be developed to show who's who, and who connects with who. The map below shows people in London interested in mapping. Drew Mackie is also working with Superhighways on a map of community and voluntary organisations in Kingston.

Network maps can be used to explore collaborations between organisations and individuals working in a particular area or on a project or programme. These maps are not just visualisations - they can be analysed to show clusters of sharing and collaboration, searched to show needs and the availability of skills and resources. 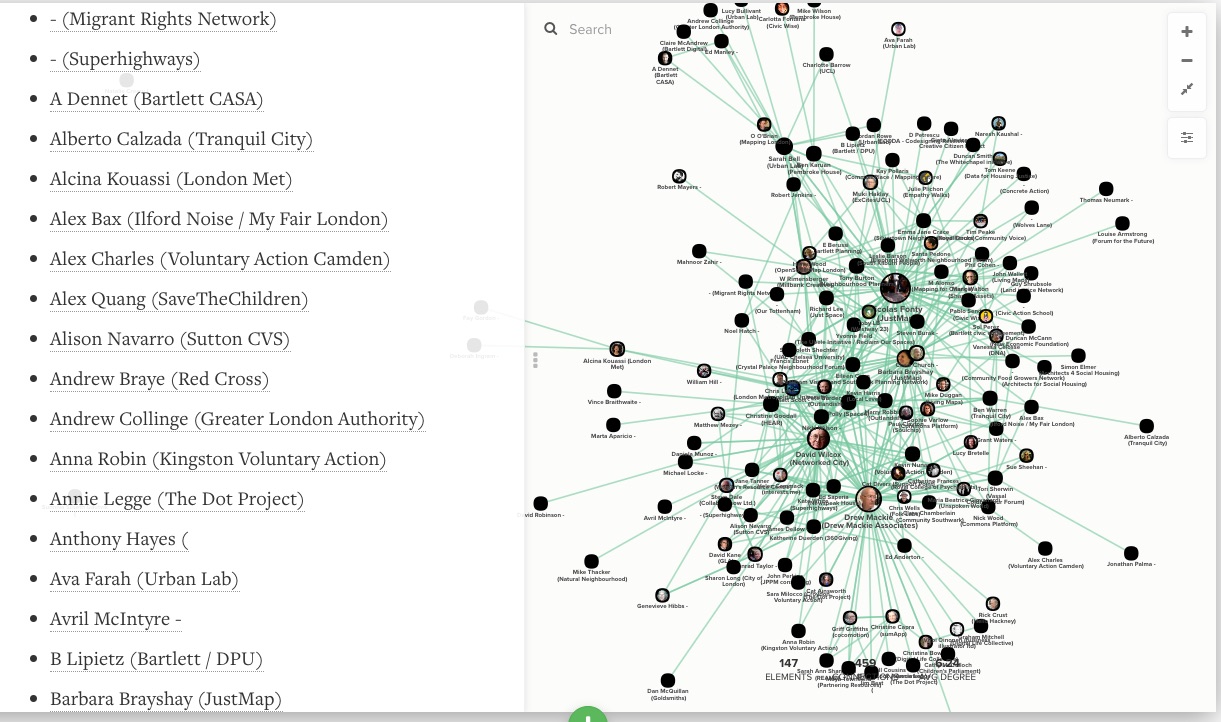 ‘Networked City’ map of collaborations across people and organisations engaged in mapping in London and beyond.

We are working on a system where people and organisations who wish to feature on the maps control the input and updating of information.

In July 2017 we worked with a group of pan-London networks to start developing a map showing existing connections, and potential for collaboration. We contributed extensively to the advisory groups for the new London resource centre - London Plus. These contributions helped formulate the job description for a Networks Partner staff post.

In October 2018 we'll help a group of London networks develop further plans for mapping and communications.

Maps are good for showing on-the-ground facilities, information, and connections between people and organisations. We also need ways to bring together what's happening in-the-cloud … on websites and social media.

That's possible using personal and public dashboards like Netvibes. We'll develop a demonstration of how that could work for individual, private use - and as a public dynamically-changing noticeboard.

As we understand more about the information and communication needs of residents and network members, we can identify and suggest additional methods that we could bring into the system. We can also explore how to provide support for people in learning how to use the maps and communication systems.

Events and a Living Lab

During 2017-18 we ran a series of events, which are detailed here, together with a Living Lab workshop

Our Way Ahead and Connecting Londoners ran the workshop with about 50 people on November 16 2017 at London Metropolitan University to play through how to develop networked support systems for civil society.

We negotiated how we could support each other with funding, endorsement, and sharing. And we decided who could deliver on the ideas. We then captured our reports of the project ideas on video - and discussed what we had learned from the session.

A community of practice for network builders

Exploring how London can be a more Networked City
A background paper for our launch event on January 10 2017, including a summary of The Way Ahead initiative, models for cooperation and collaboration in the networked age, the development process for our exploration.

Supporting co-production
A note for The Way Ahead group on co-production, covering models for engagement, cooperation and collaboration, and the idea of local ecosystems.

Connecting Citizens
A paper summarising an approach to using digital technology, network thinking and self-organising to address three linked challenges: how people can find opportunities and services, and develop new relationships in their local communities; how to develop civic infrastructure when existing systems are reducing and new approaches are needed; supporting community connectors in their role of making connections and building relationship in local communities, and online